There are reports of oxygen shortages from all corners of the country amid the deepening crisis of the second wave of coronavirus. Thousands of people are losing their lives due to a lack of oxygen.

Similar news has come from Uttar Pradesh. Here a woman took her ailing husband in auto and reached SN Medical College. Her husband was having a lot of difficulty breathing.

The husband was not hospitalized, so the woman tried to give oxygen to her husband from her mouth. Even then, she could not save her husband’s life. 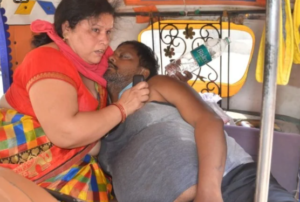 According to a report in the Hindi newspaper Amar Ujala, the woman’s name is Renu Singhal. Renu’s husband Ravi Singhal suddenly deteriorated on April 23. Renu rushed to the hospital with her family with Ravi.

Before going to SN Medical College, she pleaded for her husband to be admitted to Sriram Hospital, Saket Hospital, and KG Nursing Home.

According to the report, the beds in these hospitals were not empty, so Ravi was not admitted.

Renu finally autoed and took her husband to SN medical college. Even there her husband was not admitted. Meanwhile, her husband continued to have difficulty breathing.

Renu kept trying to breathe her husband from her mouth. But her husband succumbed to his injuries. The medical college finally declared her husband dead. After which, Renu burst into tears.

Meanwhile, there have been reports from Agra that the corona patient is losing his life when he does not get a bed in the hospital. The previous day, 70-year-old Govind Prasad Garg was not admitted to the medical college itself SN.

They were having fever. Having trouble breathing. He died outside the medical college.