Hero of Ram Mandir Movement: Kalyan Singh was the Asset of BJP 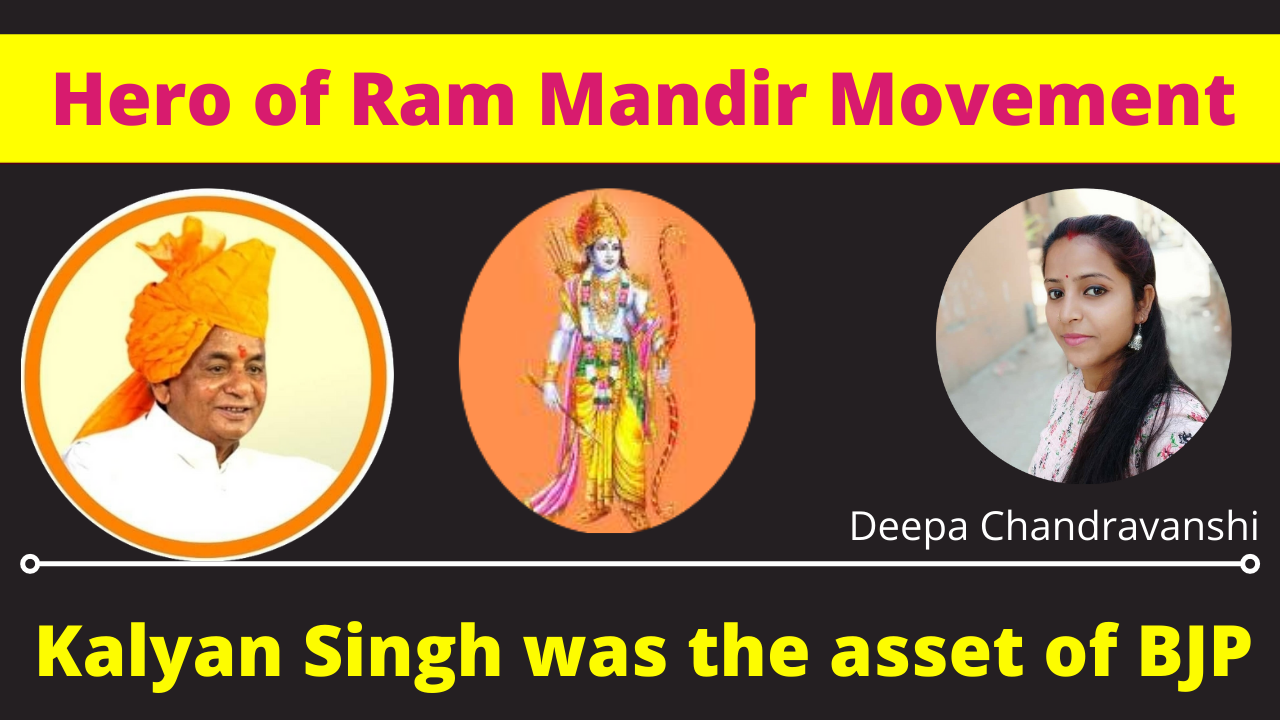 Hero of Ram Mandir Movement: Kalyan Singh was the asset of BJP

Kalyan Singh became the main face of Hindutva and it was through his use that BJP came to power in Uttar Pradesh.

He was also the architect of identifying the most backward castes and making the party’s entry among them.

Kalyan Singh had given a new base to the BJP. With this experiment, the BJP came to power on the Rajpath.

Kalyan Singh was the only BJP leader to be sentenced by the court for the demolition of the Babri structure, while all other party leaders were acquitted.

Kalyan Singh became the first, strong and prominent face of Hindutva. He was the first Chief Minister to sacrifice Ram Mandir.

He was the first leader, who took the BJP out of the shell of the Brahmin-Baniya party and gave it a wide base in backward politics. In fact, Kalyan Singh was the ‘poster boy’ of the Ram Mandir movement.

He was the architect of identifying the most backward castes and making the party infiltrate among them. What should be the BJP’s reservation policy – he was its strategist.

In the Bhopal session, it was Kalyan Singh who laid the reservation policy of the party and also advocated for giving the backward share in the organization. Patience is essential in politics.

If Kalyan Singh had not been impatient, then Advani would have been the captain of the BJP. But Kalyan Singh’s ego collided with the tallest BJP leader Atal Ji. This impatience made him leave the party twice and the car of this powerful leader was derailed.

Barring the second part of his Chief Ministership, he was the Chief Minister who caught the pulse of the people, was honest, principled and stubborn on issues.

Before assuming the office of Chief Minister for the first time, he went to Ayodhya and took the oath to build a Ram temple, which he kept till the dismissal of his government over the question of Ram temple.

But the second phase of his chief ministership marked the beginning of the end of his principled politics. He had to compromise with his own made-up principles.

In the first term, he had started the end of the mafia politics, in the second term, all the same, mafia was in his cabinet. The strings of his trust and confidence were weakened by both the Sangh and Atal Bihari Vajpayee.

He remained under the illusion that the Sangh and Atal Ji had hatched a conspiracy against him, which was not correct.

He was always angry with the Sangh that the structure was demolished by deceiving him and he always felt insecure with Atal Ji.

Kalyan Singh’s backward politics would repeatedly lead him to Mulayam Singh’s side and the core element of Hindutva in his personality would draw him to the BJP.

His latter half passed in this dilemma. This dilemma was also reflected in the biggest and most talked-about event of his life.

On December 6, 92, when the kar sevaks attacked the Babri structure, politics was very active from Delhi to Lucknow.

When he was informed about the vandalism by the kar sevaks who had climbed the structure from the control room in Ayodhya, he was taken aback.

He was torn between two different ends of protecting the disputed premises and not allowing the kar sevaks to get scratched. Kalyan Singh asked to vacate the premises without firing bullets.

However, he was upset that if the VHP had any such plans, he should have told it too.

He was getting a call from Delhi Home Minister SB Chavan. The private secretary to the prime minister also called up the Faizabad commissioner to control the situation and use central forces, but Kalyan Singh bluntly said, ‘Trying that the kar sevaks come back, but I will not fire.’

As much as Narasimha Rao was hurt by the demolition of the Babri structure, Kalyan Singh seemed equally hurt and deceived.

However, Kalyan Singh had some doubts. In the report sent by the district administration to the Home Secretary on the night of December 5, it was said that there is a section of kar sevaks, who are angry with the change like kar seva.

That is, symbolic kar seva is not being embraced by them. Sensing the urgency of the occasion, Kalyan Singh had sent BJP President Murli Manohar Joshi and LK Advani to Ayodhya the same night, while both of them were to go to Ayodhya on the morning of December 6.

In the evening after the demolition, he called a meeting of senior officers with the Chief Secretary, Home Secretary and Director General of Police. He asked for a file and gave written orders not to shoot at him so that later the accountability of any officer is not fixed.

With time, Kalyan Singh changed the line. He was surprised at first, telling himself that he had been deceived. But the pulse of the public took responsibility of the collapse of the structure on itself.

After his resignation, he bluntly declared that ‘this was an explosion of strong Hindu sentiments because all three are equally responsible in keeping the matter hanging.

He said that it is true that I had taken the responsibility of protecting the structure, but I had also said that my government would not shoot at saints and kar sevaks. When I took my way, no one listened to me.

I wanted to separate the disputed building and the place of Kar Seva. It was the ‘Safety Valve’. The incident of December 6 could have been avoided by him. But I was not listened to.

Non-BJP parties obstructed it. The gun was fired on the shoulder of the court. When I interviewed him on the third day after the Babri structure collapsed, he told me, ‘I was deceived. Got cheated on me.

If there was a plan, I should have told it too. Perhaps this tusk remained in Kalyan Singh’s chest till the last moment!

Kalyan Singh has left behind a history that will always keep him alive in the eyes of politics and society.

He was one of those rare politicians whose mark is equally imprinted on all aspects of life including politics, society, religion, faith and ethos. Time has evaluated them with great ruthlessness.

The decisions which he was hurt, saddened, shocked, the charge sheet of those decisions was also put on his forehead. Their evaluation is incomplete. Maybe history will evaluate them correctly one day.

Can this Nitric Oxide Nasal Spray really kill the Coronavirus?

Can this Nitric Oxide Nasal Spray really kill the Coronavirus? Since December 2019, reports of people getting sick due to a mysterious infection started coming ... Read More

Jitin Prasad in BJP: Another Message for Congress

Jitin Prasad in BJP: Another Message for Congress Jitin Prasada was just waiting for this. He was about to leave the Congress before the 2019 ... Read More

NEWER POSTRakshabandhan Special: Culture-Heritage & Changing Life Values ​​of Festivals
OLDER POSTFactified Fact Review: You Must Have a Parking Space to Buy a Car in Japan