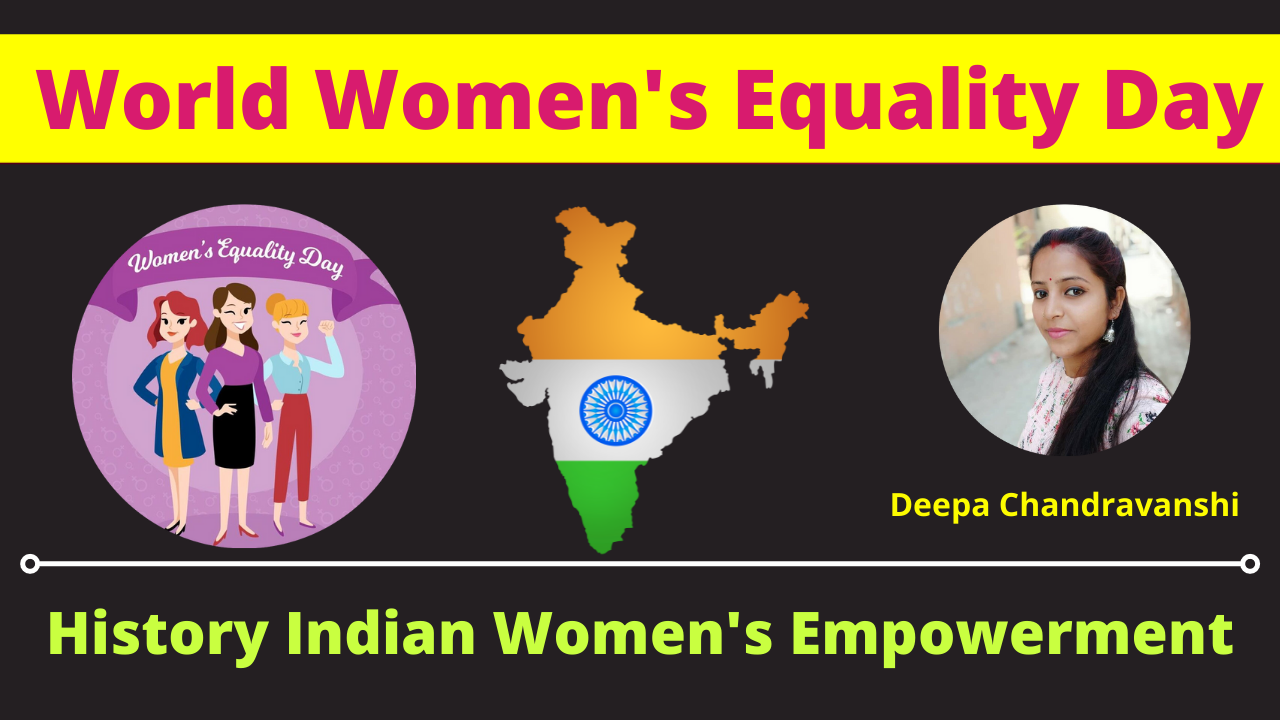 New Zealand was the first country in the world to introduce women’s equality in 1893. In America, on ’26 August’, 1920, women got the right to vote for the first time through the 19th Constitutional Amendment.

The status of a woman in India has not been seen or found anywhere in the world. Women were the visionaries of many hymns of Rigveda.

Who can ignore the hymns (39th and 40th) of the tenth mandala of Rigveda composed by Brahmavadini ‘Ghoshal? Women were educated.

The hymns composed by him remain memorable and readable. ‘Juhu’, the wife of ‘Jupiter’, Yami, the daughter of Vivasvan, Shraddha of Rishi, the serpent, was not only the author of mantras but also a poetess.

In fact, since ancient times, believing in ‘Sangachhdhvam Samvaddhvam Sam Vo Manansi Jatanam’, women marched shoulder to shoulder with men on the path of progress, presenting a strong pillar of their empowerment and appeared before the world.

New Zealand was the first country in the world to introduce women’s equality in 1893. In America, on ’26 August’, 1920, women got the right to vote for the first time through the 19th Constitutional Amendment.

Before this, women had the status of second class citizens there. Since 1971, 26 August was celebrated as ‘Women’s Equality Day’ due to the efforts of Bella Abzug, a woman lawyer who constantly struggled to get equal status for women.

The objective of Women’s Equality Day

The special purpose of celebrating this day is that women empowerment is promoted. Along with this, awareness has to be spread on many issues like discrimination, rape, acid attacks, foeticide. Well, in today’s time, women are making their name bright in every field.

What is the voting status of women in India?

The history of women’s voting in India is similar to that of America. During the British rule in 1921, Madras State first gave women the right to vote. In 1950, women all over the country started voting.

It is worth noting that in the 2019 Lok Sabha elections, the total voting in India was 67.4% and the voting percentage of women was just 0.2% less. In states like Bihar, UP, West Bengal, Jharkhand, Kerala, Uttarakhand and Goa, women outnumbered men in voting.

India has always been sensitive to women’s social security, self-reliance, autonomy as well as educational, economic and political empowerment, with few exceptions.

Various laws made in India also reflect the same thing. The five major laws of India are related to women’s rights and protection, which every woman should know so that she can become aware and aware of her rights and security.

Posh – The Sexual Harassment of Women at Workplace (Prevention, Prohibition and Redressal Benefits Act, 2013)
Posh is a law designed to give legal protection to women from any form of sexual violence and harassment at the workplace.

Like this law, it was made mandatory to form a posh committee in any government or non-government office, where there are more than ten employees and where women work.

This law is a step forward from the Visakha guidelines, which have been made to ensure compliance with the instructions of those guidelines by giving them the form of a law.

Protection of women from domestic violence (2005)

This law came into force in India on 26 October 2006, intending to protect women from all forms of domestic violence.

Data from the National Family Health Survey to the UN and the World Health Organization were repeatedly warning us that 70 per cent of women in India are victims of domestic violence inside their homes and only 10 per cent of women report that violence.

There was no such law in India, which could ensure the safety of women inside the homes, so this law came in 2006.

This is the most historic and most important law brought for women in the history of independent India.

According to this law, taking or giving dowry in India, both have been declared a crime by law. Imprisonment for five years and Rs 15,000 for this. There could have been a fine of up to Rs.

This law applies to every government and non-government company, where more than 10 employees are working, although the Maternity Benefit Act came into force only in 1961, then the leave used to be only three months. In 2017, this was extended to six months.

Shah Bano Begum Vs Mohammad Ahmed Khan case is also known as the ‘Shah Bano Case’. This case has been important in many ways in the judicial and political history of independent India.

Shah Bano demanded maintenance allowance from her husband Mohammad Ahmed Khan under Section 125 of the Code of Criminal Procedure (CrPC).

The court ruled in favour of Shah Bano and amended Section 125 of the Criminal Procedure Code.

This judgment gave relief to all Muslim women in the matter of divorce as the new law provided for them to receive maintenance from their husbands. A similar decision was also taken in the judgment of Shamima Farooqui Vs Shaheed Khan.

Before the Vishakha v State of Rajasthan, there was no such guideline as to the safety of women at the workplace till 1997.

In April 2013, the court framed the Prevention, Prohibition and Redressal Act, 2013 for the Sexual Harassment of Women at Workplace Act.

These directions given by the Supreme Court in the Visakha case have played an important role in providing security and equality to women at the workplace today.

In Secretary, Ministry of Defense v Babita Punia (2020), women were given a permanent commission in the army. In Bhuvaneshwari Vs Puranik, the married woman was also given the right of compensatory appointment.

Similarly, in the case of Joseph Shine v Union of India, jarta was quashed as a crime. In the case of Danamma @ Suman Surpur Vs Amar, daughters were also entitled to the same property as sons.

Not only this, in the case of Roxan Sharma vs Arun Sharma, it was talked about giving the guardianship of a child below five years to the mother.

In the case of D.Velusami vs. D. Patchaimal, the court brought the live-in relationship under the Domestic Violence Act. Considering the seriousness of the issue of female feticide in CEHAT v Union of India, the Supreme Court issued a guideline.

The case of Shayar Bano vs Union of India played an important role in ending triple talaq.

The world is witnessing the tragedy of Jahan-Taliban. It is silent on the atrocities on women, in India, the Supreme Court has recently opened the way for girls to go to the National Defense Academy.

One thing has become clear now that India was and will always be the best in the world, based on its culture, civilization and respect.

Milkha Singh’s struggle: Delhi’s platform and the way is nowhere