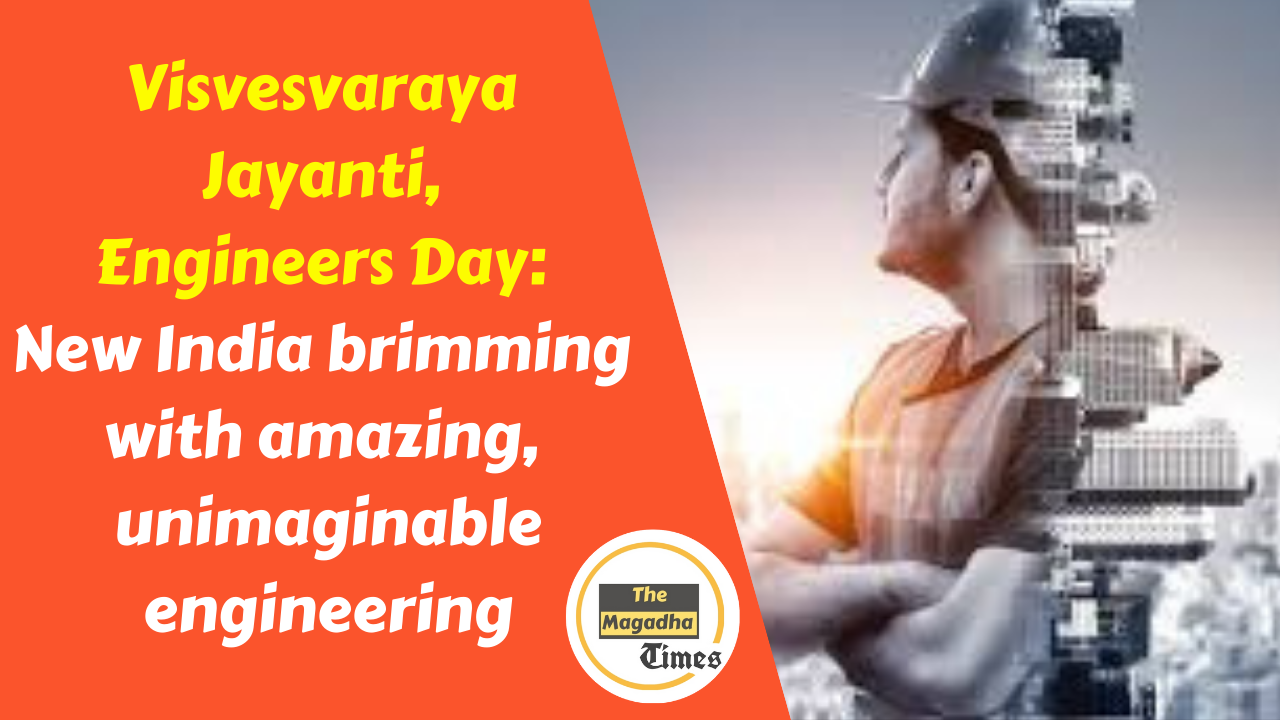 Today in the 21st century, many similar stories are being written about the unsurpassed skills of Indian engineering. This is also a new chapter in the wonderful engineering of India, which the whole world is amazed to see.

Forget the heights of the Eiffel Tower, the Statue of Liberty.

If you want to see engineering on the skyscraper heights, then come to the valleys of Kashmir, reach the banks of mother Narmada in Kevadiya, here you will get to meet with new resolutions of new India’s intellect, skill and engineering.

It is not a long time ago when the distance of meters on the border could be fixed in days. Today, the successful completion of kilometres is being done in minutes.

The inch-by-inch path invited conflict. Now the Miles of Tunnel is telling the story of India’s sovereignty, honour and competence. This is new India. Stand guarding your borders and accept the challenge by eyeing every enemy’s eye.

Actually, this is also a new chapter of India’s wonderful engineering, seeing which the whole world is amazing. Forget the heights of the Eiffel Tower, the Statue of Liberty.

If you want to see engineering on the skyscraper heights, then come to the valleys of Kashmir, reach the banks of mother Narmada in Kevadiya, here you will get to meet with new resolutions of new India’s intellect, skill and engineering.

Thousands of years ago, the architectural and manufacturing techniques with which our ancestors introduced the world to the architecture of monasteries, temples, forts, more or less in the 21st century, many similar stories are being written about the unsurpassed skills of Indian engineering.

Today, whether it is the world’s longest tunnel or the tallest statue or the highest rail bridge, everything is in the name of India.

India’s growing and changing India due to engineering

It is also like restoring India’s great and scientific engineering heritage. Today our engineering coin is surprising the world. it’s all happening.

The government has accorded top priority to the extravagant efforts to galvanize Indian talent. Today, there is no such area left on the 3428 km long LAC of India where our forces will have to wait for the weather to open to reach.

The government has created such a network of all distant roads, bridges, tunnels, which is badly knocking the enemy countries. All this seemed impossible 10 years ago and the fact remains that it was outside the priority of the then governments.

Infrastructure development in the border areas is not a part of our strategic policy.

That is, from one point of view, Congress was not interested in development on the borders.

As a result, during the time of the United Front government in 1997, the then Prime Minister Shri HD Deve Gowda had put the “Bogiveel bridge” connecting Assam-Arunachal in the cold storage till 2014.

Here the Modi government took this bridge costing 5920 crores in its priority and completed it in record time. This 4.94 km bridge is also an example of the indomitable and amazing capabilities of the engineers of India.

Fighter aircraft can be landed on this bridge connecting Dibrugarh in Assam to the Dhakoji district of Arunachal Pradesh. Our engineers have designed it in such a way that even in disasters like earthquakes and floods, it will stand like this for the next 120 years.

Prime Minister Shri Modi dedicated it to the nation three years ago on the birthday of former Prime Minister Atalji. This bridge has not only connected Assam and Arunachal but has also made it possible to send logistics and the army to the Chinese border in minutes.

The unfavourable conditions under which the engineers of the Border Road Organization have built this bridge are astonishing aspects of Indian engineering prowess. For the dragon ambushed on the border, it is nothing less than a shock.

This feat of the country’s engineers is not limited to this but is making its presence felt in every part of the strategic importance which has been considered sensitive to India’s sovereignty, unity and border integrity.

A rail bridge higher than the Eiffel Tower is ready-

India is one from Kashmir to Kanyakumari, it was like a dream to prove it through railway line also but our engineers have fulfilled this dream now.

This rail line will save 4 to 5 hours for the army to reach the Kashmir Valley. China is getting very upset by this news. This bridge is built in the Reasi district of Jammu and Kashmir.

India’s Chenab Bridge is taller than the Eiffel Tower. With the construction of this bridge of strategic importance, now the entire Kashmir Valley has been connected with the rest of the country.

This bridge is part of the USB RL project, the rail line being built from Udhampur in Jammu to Baramulla in Kashmir.

With the construction of this railway line, the Indian Army will not only be able to reach the Indo-China border but will also save four to five hours.

To build this bridge, this tallest crane ever in the history of Indian Railways has been used.

With this, keeping the heavy steel bridge segment hanging from the ropeway of a crane in the sky at its designated exact place is an example of the amazing abilities and dexterity of our engineers.

With this project of Rs 28 thousand crores, the country will be connected with the railway line from Kashmir to Kanyakumari. This rail line project of 272 km has been declared of national importance.

This railway line is crossing between the Shivalik range of the Himalayas and the most inaccessible area of ​​the Pir Panjal range of Central Himalayas. This rail line project of 272 km has 38 tunnels and 97 bridges.

Special features of this bridge-

Railways claim that they will not be harmed even in the attack of any terrorist blast. It will continue to work even if a span is destroyed. The train will run on it at a speed of 100 kmph.

Its steel is capable of withstanding temperatures from -10 to 40 °C. 28,660 metric tonnes of steel has been used in the construction of the bridge.

The Chenab arch has steel crates filled with concrete for stability. The total weight of the arch is 10,619 metric tons. The main arch span is 467 meters vertical and 550 meters horizontal.

The total length of Chenab Bridge is 1.315 km. It is also a matter of mark that this work started in 2003 was stopped midway but Prime Minister Shri Narendra Modi declared it a project of national importance and started it again and the engineers of the country Made it come true.

Forget the Statue of Liberty, and the height of the Spring Temple-

Statue of Liberty, Spring Temple, the world’s tallest statue read in general knowledge books, will no longer be in books in terms of height, because the engineers of India built a statue of Sardar Patel 182 meters high in Kevadiya, Gujarat with their efforts. It is twice as tall as the 93-meter high Statue of Liberty in New York.

Four metals have been used in the making of this idol, due to which there is no risk of corrosion for years.

It is also a unique example of our engineering that even an earthquake of magnitude 6.5 on the Richter scale cannot damage this statue.

Engineers of India are also working day and night to build the 210-meter high statue of Chhatrapati Shivaji Maharaj in Mumbai.

The Buddha statue in the Spring Temple of China is 153 meters high, which is said to be the largest Buddha statue.

Here the construction of the proposed Under River Metro Rail project in Kolkata, pending since 2009, has become another unique example of Indian engineering during the tenure of the Modi government.

This 80 km road at an altitude of 17500 feet is a very important example of the skills of the engineers of the Border Road Organization.

Its construction has not only ensured our continuous monitoring of the border of China but has also simplified the inaccessible journey of Kailash Mansarovar.

The project was approved in 2005, but its work started in 2018 when the Cabinet Committee on Security approved Rs 440 crore, including it as a top priority project.

It was to be completed by 2022, but the engineers of the country made it ahead of time. This road connects Dharchula with Lipulekh (China Border). According to Vimal Goswami, Chief Engineer of this project “Heerak”-

The construction of this strategically important route has made it easy to reach the inaccessible Himalayan region of more than 80 km, starting from the Mangti camp near Tawaghati and buzzing in the Beas valley and up to the security posts located on the Indian territory along the border.

The special thing is also that now except thefive-kilometree area of ​​China, the entire journey is being done by vehicles. Apart from Hindus, the importance of Kailash is also for Buddhist, Jain Tibetans. Indian engineering has also made this journey accessible with its skills.

Father’s Day Special: Grateful for the role of the father in the family?

Father's Day Special: Curse the Patriarchy or be grateful for the role of the father in the family? In our Indian society, the father is ... Read More

Today 14th September is celebrated as Hindi Diwas all over the country. It has a history of its own. On this day on 14 September ... Read More

Dadasaheb The Patriot The biggest feature of a democratic country like India is that anything can be debated here. Now, as soon as Harikrishna Giri ... Read More