Vaccination for all adults may cause blood shortage 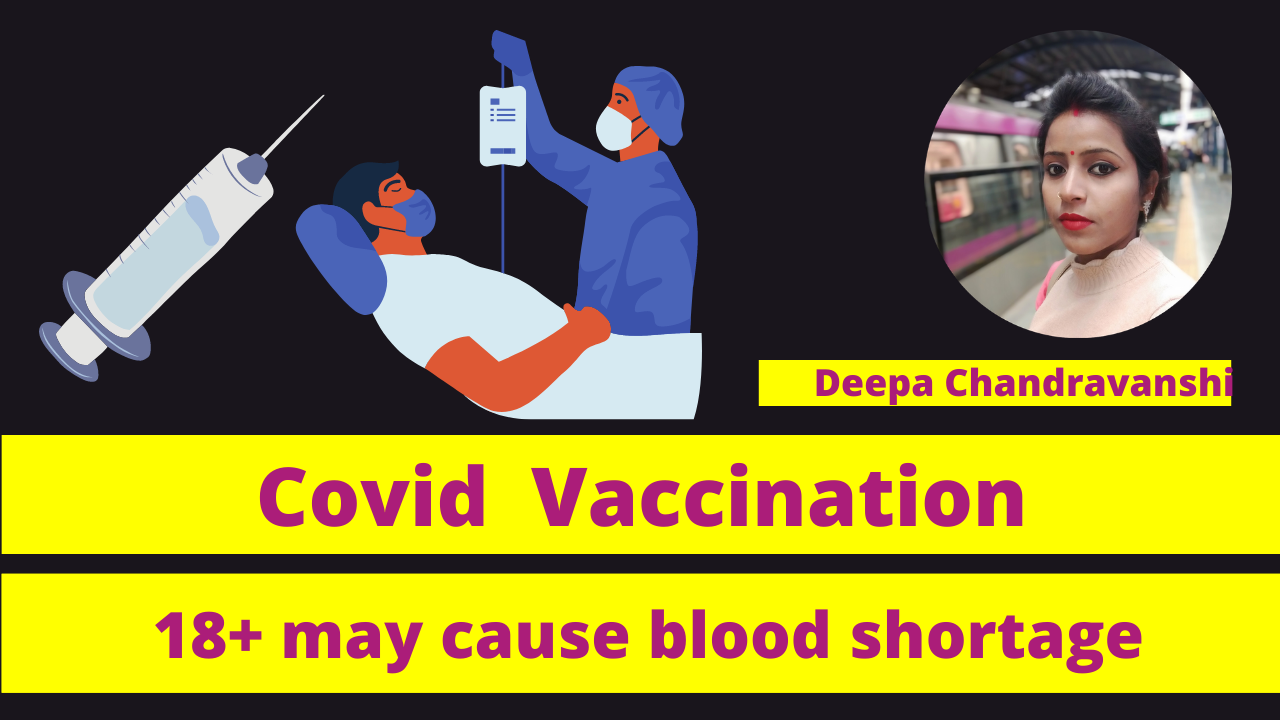 Vaccination of 18+ may cause blood shortage

Blood donation will not be done first, there will be a lack of blood in the blood banks, it may be difficult for the patients with Thalassemia.

Blood pressure can increase in the corona period because after taking the vaccine you will not be able to give blood. This will be due to the vaccine protocol.

In this case, there will be a crisis in the blood banks about such blood groups, which are not easily available. Since May 1, the government has included people up to the age of 18 in the vaccination campaign and the blood donors are more in the same age group.

In such a situation, the problem may increase after May 1 if preparations are not made about the blood. The National Blood Transfusion Council NBTC has issued a guideline in this regard. However, studies are still going on about this and this can also change.

Human blood will be affected after the vaccine

Dr. Devendra Prasad, former joint director of the blood safety department of Bihar State AIDS Control Committee and assistant clinical pathologist of Patna Medical College, says that there will be a blood donation crisis in front of those taking the vaccine.

After taking the first or second dose of the vaccine, he or she must follow the protocol of the respective vaccine. The NBTC has issued an interim guideline in this regard, according to which the protocol for the vaccine has been talked about.

Dr. Devendra Prasad says that there is also a churn in the NBTC that blood transfusion should be done in the protocol between the first and second doses, but no guidelines have yet come.

There is still a discussion going on about the cocaine and covishield vaccine. Guidelines can also change according to time and requirement.

Antibodies to vaccine users will be affected

Dr. Neha, in charge of the Blood Bank of Patna AIIMS, says that according to the guidelines so far, blood can be donated only after giving the second dose of vaccine. 56 from the first dose, while blood donation can be given only after 28 days from the second dose.

Dr. Neha states that if a covaxin and covishield both have different protocols and blood donation can be done only according to that protocol.

However, Dr. Neha also says that the vaccination of people from May 1 to 18 years will not affect blood donation, because the time has come for blood donation for those who took the vaccine in the first phase.

Those who take both vaccine doses in the first phase can also donate blood. Dr. Devendra Singh says that according to the current circumstances any other guideline of NBTC may come.

Mukesh Hisariya of the MAA Vaishno Devi Seva Samiti, who works in the field of blood donation, says that operations are postponed during the Corona period.

In this case, the requirement of blood decreases slightly. Yes, Thalassemia patients can suffer. Mukesh says that blood donation has decreased in the Corona era anyway.

People associated with blood donation say that Thalassemia patients may face problems if not already given. There are many groups of patients in whom blood is difficult to find.

Even during the lockdown, such patients had a lot of problems. Many patients had a crisis in their lives. In such a situation, there is a churn in the youth who donate blood for Thalassemia patients.

How to beat the new problem of the Covid era?

Blood donation camps are needed to counter the new problem of the Covid era. If the youth donate blood before taking the vaccine dose, then this crisis will be curbed.

There will be no problem with the blood of any group. If both vaccination and blood donation is necessary. So we have to consider both.

Know the rules of blood donation after vaccination

Jharkhand and Chhattisgarh top in corona vaccine waste, know the condition of other states

Jharkhand and Chhattisgarh top in corona vaccine waste, know the condition of other states On behalf of the Union Ministry of Health (Health Ministry), it ... Read More

Is India an emerging Next Space Superpower?

Is India an emerging Next Space Superpower? The whole world knows about NASA. The American space agency was officially formed in 1958, and its long ... Read More

NEWER POSTCorona: Is it safe to take the vaccine during the period?
OLDER POSTElection Commission’s new guideline 2021: West Bengal