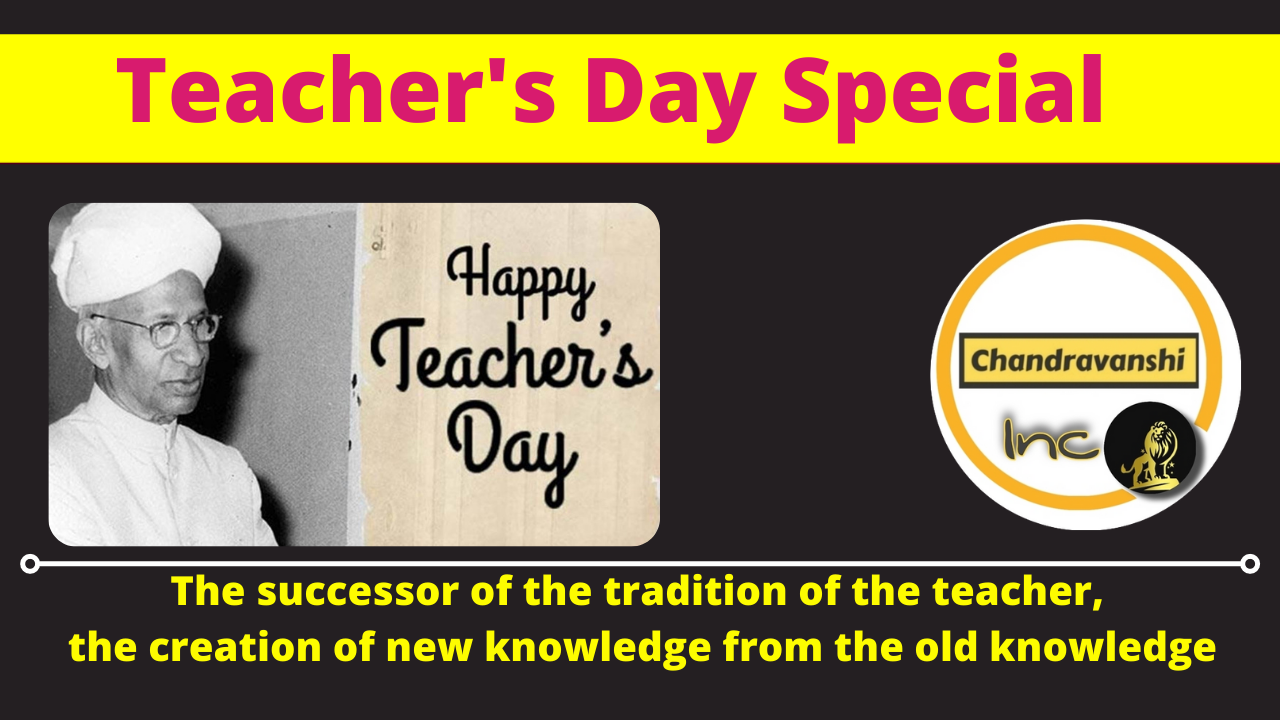 Teachers Day: The successor of the tradition of the teacher, the creation of new knowledge from the old knowledge

Education is the only means of man’s creation. Education not only creates awareness, but it also determines the social role of man according to that understanding.

In this context, the name of the philosopher concerned for the necessary effort in Indian education is Dr Sarvepalli Radhakrishnan.

It is natural that when India’s new National Education Policy, 2020 is moving towards implementation, then the education vision of Dr Radhakrishnan should be considered.

One knowledge gives rise to another knowledge.

New knowledge is always created after reviewing the old knowledge.

If there is no review of ancient knowledge, then what we think of as very new knowledge is only fiction.

Imagination power should be gained through education, but for this power of imagination to be creative, it needs a method of critical thinking.

We, teachers, have to accept that the responsibility of the teacher is to make the best human being.

Also find it featured on The magadha Times

It cannot be measured by academic achievement or post-graduate income. We have to make our students self-sufficient and capable of creative imagination.

In the whole process of education becoming state-dependent and creating resources through education if a person has come from the centre of the society to the periphery, then he is the teacher.

If we have to save education, save every human being through education, then the teacher has to be placed again at the centre of education.

Each recommendation of the New Education Policy recognizes the importance of the teacher and his central role in the implementation of the policy.

This policy expects teachers to be the builders of the bright future of Indian youth. This policy also expects the state to restore the same glory of teaching, which is accepted in the Indian tradition.

In the present context, some questions related to teaching have emerged.

For example, did the teacher become a mere service provider? Are they merely transferring information to the students?

Teachers have to answer these questions with their thoughts and deeds.

The assumptions made about teachers have to be broken.

The message is to be conveyed to the general public that the service provider can make the resource, not the man, whereas the teacher makes the man, sows the seeds of humanity.

We have learned by watching some teachers in our life.

One of the other teacher’s ways of teaching, the explanation is given by him inspires even today. We have to take care that we inherit the tradition of the same teacher.

The first question in this direction should be that what is the purpose of education?

This purpose also does not always remain the same but varies from country to time. Accordingly, the education system and systems have also changed.

For example, the subject matter which was taught at the undergraduate level a few decades ago is now a part of the higher secondary classes. The importance of such titles has also changed.

Shyamsunder Das Ji was only B.A. To honour this title, an honour ceremony was organized in the city of Banaras.

The foundation of the Hindi department of Banaras Hindu University was laid by Acharya Ramchandra Shukla, a high school graduate. But nothing more needs to be said about his contribution in Hindi.

It is clear from these examples that instead of degrees and resources, innovation in the field of knowledge is the criterion of academic excellence.

It requires qualified leadership to ensure academic excellence. Big changes in India have happened due to the resolve and dreams of the youth.

The first such change in the known history of India was made by Nachiketa. He questioned the entire tradition and fought to the death to make it better and socially useful.

It is from such resolutions that a superior and responsible society is created, each member of which is a vehicle of change.

The history of India has been written by the determining power of the youth.

We are a bundle of immense possibilities. When we make up our minds to do something and learn, then we will be able to become capable, skilful, knowledgeable and responsible citizens.

It has to be remembered that learning is not sterile, it creates. The seed we sow in our consciousness so will be our future. Starting with the European Renaissance, we have reached the level of ‘Knowledge Power’ today.

We should not create institutions that make machines without human value. We have to build a holistic human being keeping in mind the needs of the Indian society.

From 20 October 1894 to 30 October 1894, the Ganpati festival was celebrated for the first time for 10 days in Shaniwarwada, Pune. Lokmanya Tilak ... Read More