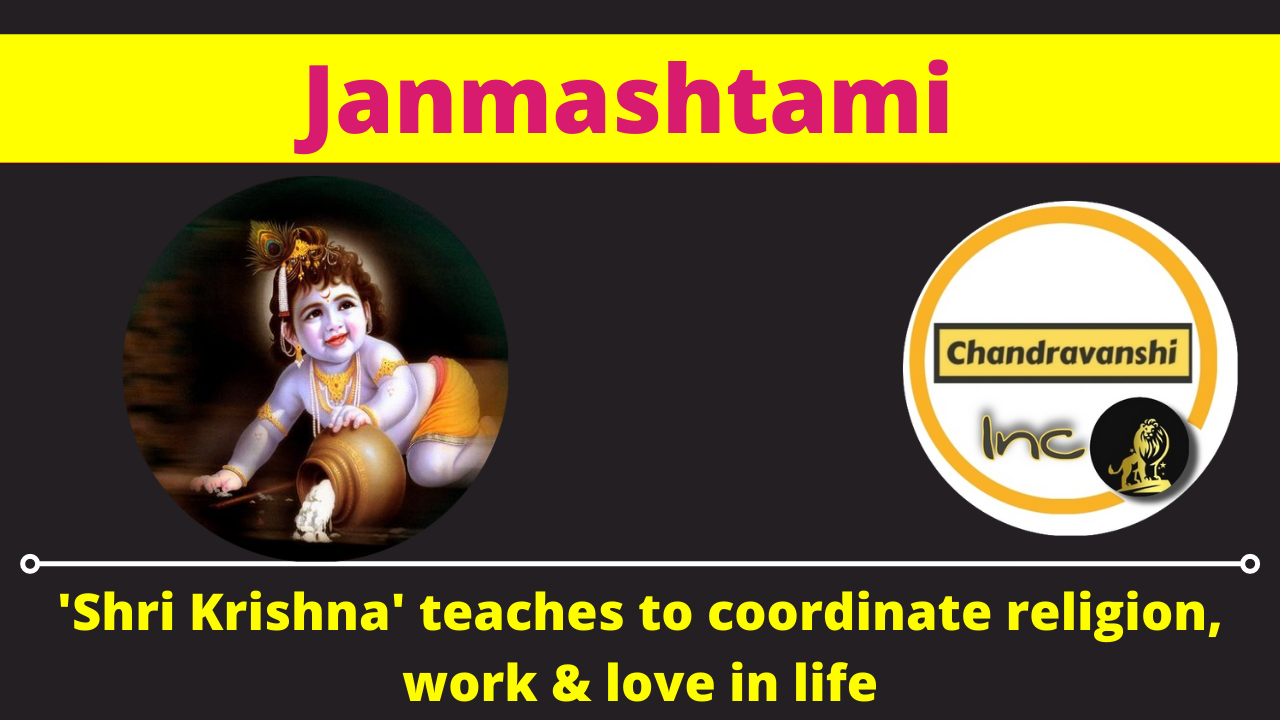 Lord Krishna is a unique superhero, he started showing pastimes from his childhood. There is a contradiction in each of his pastimes, which is generally beyond comprehension.

Where even the wisest of the wise cannot find them in the Vedas, Puranas and hymns, then the common man can get them only out of love.

In Dwapar Yuga, on the eighth day of Bhadon month, Kali Ghaneri was born in the form of the eighth incarnation of Lord Vishnu from the womb of Devaki, sister of Kansa.

Every year people celebrate the festival of Janmashtami on this occasion. Lord Shri Krishna is known by the names of Devaki Nandan, Banke Bihari, Nandlal, Kanhaiya, Gopal, Keshav, Vasudev, and Dwarkadhish etc.

Lord Krishna is worshipped as God in Sanatan Dharma, but he is not only worshipped as God, but his whole personality teaches you to coordinate in all religions, karma, love and relationships in life.

If a man takes inspiration from his life instead of just worshipping him, then he can overcome in every field in life.

Shri Krishna was not a name but a karma yogi, ideal philosopher, and Yug Purush of this era, that is why there are followers of Lord Krishna not only in Sanatan Dharma but all over the world.

Written By Deepa Chandravanshi founder of The Magadha Times

Lord Krishna is a unique superhero, he started showing pastimes from his childhood. There is a contradiction in each of his pastimes, which is generally beyond comprehension.

Where even the wisest of the wise cannot find them in the Vedas, Puranas and hymns, then the common man can get them only out of love.

That is why the uniqueness of his personality is that the invaluable Brahman knowledge which he gave to the entire human race through his mesmerizing pastimes and teachings, cannot be tied even by any great writing.

He is very close to everyone despite being God, He is extremely human. His whole life was full of wonderful pastimes but in the true sense, his personality was always like a friend.

He used to graze on the banks of the Yamuna, did mischief with the cowherds and also made Raas with the gopis. Being full of divine powers, he is a Lok Nayak in the true sense.

The description of the character of Lord Shri Krishna is found in the Mahabharata composed by his contemporary sage Ved Vyas, a part of which is cited in the form of Shrimad Bhagavad Gita.

There is a dialogue between Lord Krishna and Arjuna in Shrimad Bhagvat Geeta, which inspires human beings to follow the path of Dharma not only in the era of Mahabharata but also in the time of Kali Yuga after ages.

This is the reason why these words from the mouth of the Lord have been threaded in the Shrimad Bhagavad Gita, not only in Sanatan Dharma but in the whole world it is known as a great book.

Lord Krishna explained to Arjuna the secret of life and Dharma and Karma in such a way that no other great man can do it. Shri Krishna was rich in a supernatural and wonderful personality.

On the occasion of Janmashtami, Lord Krishna should not be worshipped by fasting or by offering only fruits, flowers and naivedya, but should follow the path shown by him.

Shri Krishna is the epitome of love

What are the true meaning of love and the attachment of true love, it spills out from the entire personality of Lord Krishna. Where Lord Krishna blessed Devaki by taking birth from her womb, while being a God, she immortalized the love of mother Yashoda forever.

He blessed Braj with his pastimes, then blessed Gwal-Bal and Sudama with his friendship.

With her naughty pastimes, all the mothers of Braj were drenched with motherly love, while at the same time, by creating Raslila, blessed the gopis with the wind of love.

They are the naughty ones who break the pot, they are the witches of the gopis.

While there is a guide for Arjuna, there is also a friend and brother for Draupadi. Where Krishna is the knowledge of Brahman in the depths, then he is simply a feeling, which the great men of knowledge and meditation accept defeat while searching, then they are attained even by pressing Radharani’s feet in Brajbhoomi.

While Lord Krishna immortalized Radharani’s love as a lover, he blessed Rukmani’s life as a husband. It was only with the affection of his love that Meera became addicted to him.

Krishna showers love in every form even in Kali Yuga

Krishna is a wonderful personality

Lord Krishna cannot be compared with any great man in the world. He took birth on earth for the welfare of the world. He is beyond death, yet he chose death.

Almighty and beyond all bondage, yet born in a prisoner’s house. His personality is multifaceted, multicoloured. They have everything in intelligence, charm and love.

While he was skilled in warfare, he was a knower of politics and diplomacy, on the other hand, he was also a great scholar of philosophy. ‘Shri Krishna’ is the coordinator of knowledge, action, devotion, love and religion.

Today 14th September is celebrated as Hindi Diwas all over the country. It has a history of its own. On this day on 14 September ... Read More