Farmers to hold Mahapanchayat against BJP Bharat Bandh on September 27 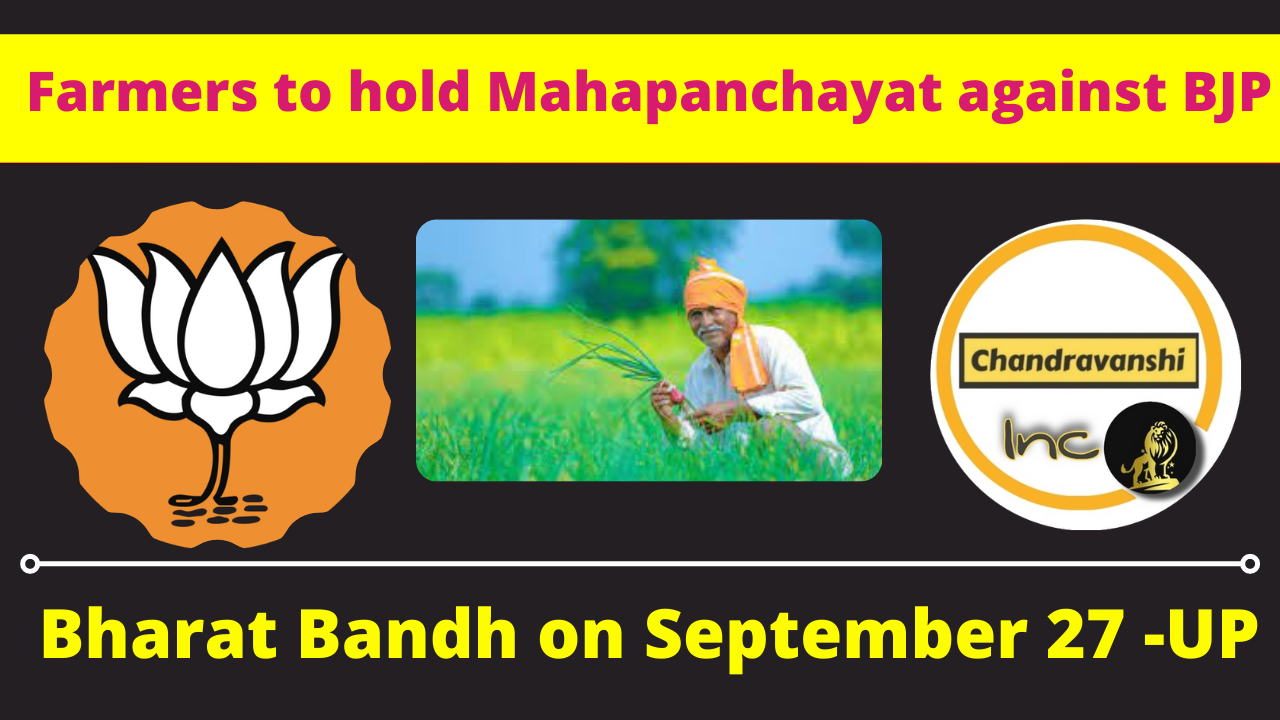 Farmers to hold Mahapanchayat against BJP in 18 Mandals of UP, call for Bharat Bandh on September 27

According to Dharmendra Malik, spokesperson of the Bharatiya Kisan Union, farmers from 300 farmer organizations spread across different states like Uttar Pradesh, Haryana, Punjab, Maharashtra, Karnataka have reached the venue, where more than 5,000 langars (food stalls) have been set up.

Muzaffarnagar: Farmers protesting against the agricultural laws of the Center organized a Mahapanchayat in Muzaffarnagar in Uttar Pradesh today. The farmers reiterated their resolve to continue their protest.

The farmers announced mobilization against the BJP in the assembly elections by holding mahapanchayat in all the mandals of UP.

Also called a Bharat Bandh on September 27. Several farmer leaders from the stage said, “They (Centre) said that only a handful of farmers are opposing the agriculture law.

So they should see how many farmers are protesting. Let us raise our voice so that it reaches the ears of the people sitting in Parliament.”

Article is also featured in the “The Magadha Times”

Farmers to hold Mahapanchayat against BJP in 18 Mandals of UP, call for Bharat Bandh on September 27

Farmer leaders announced from the stage that they would oppose BJP in the upcoming assembly elections of UP.

Farmer leaders said that now mahapanchayat of farmers will be held in all 18 mandals of UP including Gorakhpur, Lucknow, Banaras, Kanpur.

Farmer leaders have also called for Bharat Bandh on 27 September and said that trains and buses will also be stopped on that day. Farmers waved green clothes from the stage to show solidarity.

According to Dharmendra Malik, spokesperson of the Bharatiya Kisan Union, farmers from 300 farmer organizations spread across different states like Uttar Pradesh, Haryana, Punjab, Maharashtra, Karnataka have reached the venue, where more than 5,000 langars (food stalls) have been set up.

Farmers wearing outfits’ flags and different coloured caps were seen reaching here by buses, cars and tractors. Several medical camps have also been set up around the venue.

LED screens have also been installed in different parts of the city to facilitate viewing of the program to those unable to access the GIC College grounds.

Rashtriya Lok Dal President Jayant Chaudhary was also present on the stage of the Mahapanchayat. He has tweeted that he wanted to shower flowers on the farmers but the district administration did not allow it.

He wrote, “I am wearing a lot of garlands, I have been given a lot of love, respect by the public. Wanted to greet and welcome the food donors by showering flowers. #MuzaffarnagarPanchayat DM, ADG, City Magistrate, Principal Sec. – CM, informed everyone But not giving permission! What is the danger to the government concerning the farmer?”

Jayant Choudhary wrote in another tweet, “Wanted to show respect to farmers by showering flowers from the helicopter in #MuzaffarnagarPanchayat.

Until such a government is changed, under whose rule the farmers cannot be showered with flowers, I also garlanded flowers.” I can’t accept it!” Meanwhile, on behalf of the Muzaffarnagar district administration, City Magistrate Abhishek Singh has said that RLD’s request has been rejected due to security reasons.

As a precaution, the district administration has deployed police at the residences of Union Minister Sanjeev Balyan and Bharatiya Janata Party (BJP) MLA Umesh Malik.

The United Kisan Morcha (SKM) on Saturday claimed that farmers from 15 states have started reaching Muzaffarnagar to participate in Sunday’s “mahapanchayat”.

A group of 40 farmers’ unions, leading the farmers’ movement against the Centre’s three agricultural laws, said the “mahapanchayat” would prove that the movement would be supported by “all castes, religions, states, classes, small traders and all sections of society”. is supported.”

The existence of the Congress party in India is essential for BJP Don't be surprised Think seriously. Not only the Bharatiya Janata Party, but the ... Read More

Corona Virus: Fear of Third Wave & Children There are conflicting views about the third wave of Corona. According to an estimate, the third wave ... Read More

Why did China change its population policy? The announcement that Chinese couples would be allowed to have three children made headlines in the media around ... Read More