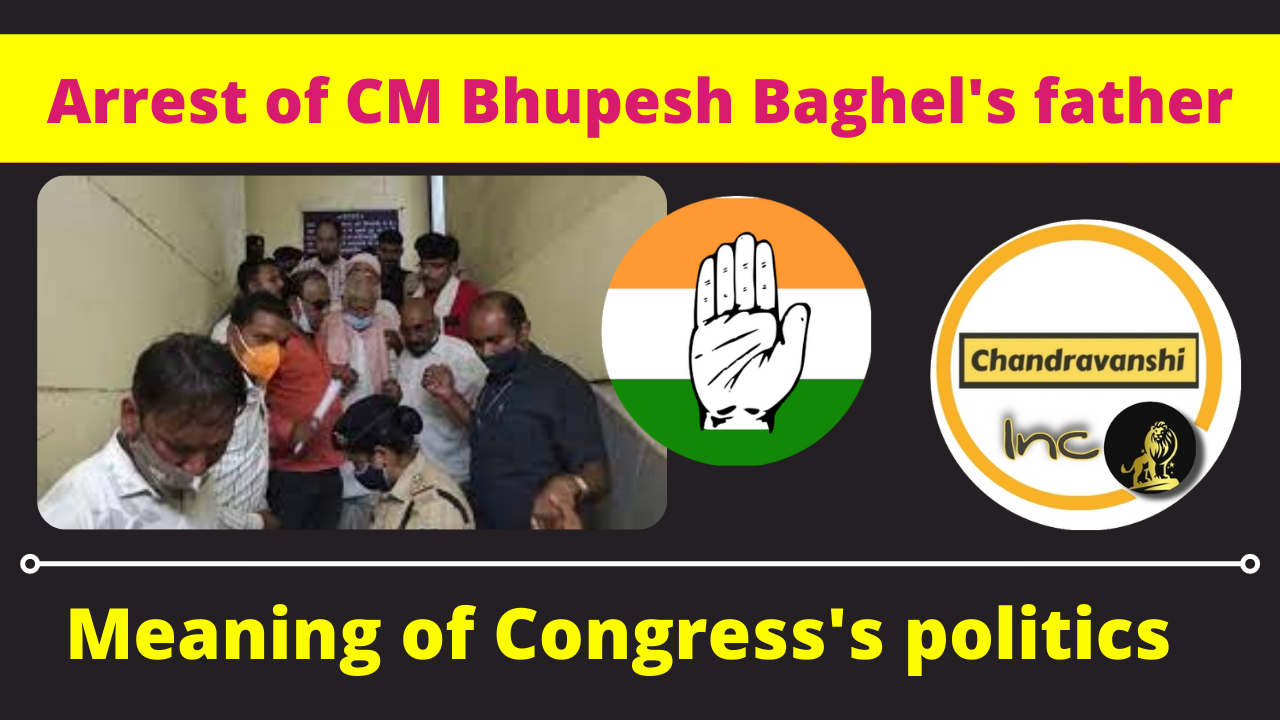 Chhattisgarh Chief Minister Bhupesh Baghel has arrested his father Nand Kumar Baghel and tried to show that if his father’s statement is going to hurt the Brahmin society then it is wrong.

At least his party i.e. Congress does not believe so and takes action against those who believe so, even if he is the Chief Minister’s father.

Arrest of CM Bhupesh Baghel’s father: Meaning of Congress’s politics, this will be the political effect

Call it ittefaq or part of deliberate politics.

A chief minister gets his own very elderly father arrested because there are elections in the coming time, he also has to give a message to the party and the country that everyone is equal in the eyes of law.

If the father also misrepresents something, then he also has the right to punishment.

In fact, Chhattisgarh Chief Minister Bhupesh Baghel has tried to show his father Nand Kumar Baghel by arresting him that if his father’s statements are going to hurt the Brahmin society then they are wrong.

At least his party i.e. Congress does not believe so and takes action against those who believe so, even if he is the Chief Minister’s father.

At this time the politics of Uttar Pradesh has heated up. There is already a lot of resentment in the Brahmin society after the formation of Yogi Adityanath’s government in the state.

In Yogi Raj, Brahmins feel isolated and tales of atrocities are told against Brahmins.

In such a situation, the eyes of all parties are on Brahmins. Parties branded especially in the name of Dalits, Backward, Extremely Backward are openly holding conventions of Brahmins, wooing them and running a campaign to connect them with them.

What does Congress want after all?

The Congress may be considered weak in the state, of course, but they have Brahmins on their agenda too.

In such a situation, if Nand Kumar Baghel says that Brahmins are outsiders, drive them away or say that Ram uneducated people, burnt Sita in the fire and created a feeling of untouchability in the society, then it is obvious that those who do politics in the name of Brahmins and This thing will sting all the mainstream parties.

It is said that Bhupesh Baghel was pressurized by the high command including Rahul Gandhi and Priyanka Gandhi to stop his father’s rhetoric or take any action at such a critical time. And Bhupesh did the same.

Who is Nand Kumar Baghel? What is the agenda after all?

Now tell you a little about Nand Kumar Baghel. It is not that he has made such a statement for the first time about Brahmins.

His whole thinking has been like this from the very beginning. Nand Kumar Baghel has been a big leader of OBC.

Nand Kumar believes in the ideology of Congress, is basically a Congressman, a devotee of Nehru Gandhi family but not a member of Congress.

He runs his own NGO – Voter Jagriti Manch. He has written a very famous book – Brahmin Kumar Do not kill Ravana.

There was a lot of controversy over the book. Cases were tried against him and he had to stay in jail for 24 days for writing it.

According to Nandkumar Baghel, a resident of Patan in Durg district, in this book, an attempt has been made to prove that Rama was wrong and that it was wrong to kill Ravana, including references to the Ramayana of Valmiki and Tulsidas.

Manu Smriti is also mentioned in this book and an attempt has been made to tell the supremacy of Brahmanism in the country, create discrimination in the society and justify the philosophy of Buddha.

This book was written about three decades ago, it was banned and Baghel has been fighting his battle in the country for years.

In an interview, Nand Kumar Baghel laughed and said-

Jail is a good place, no one comes to catch you there, don’t worry about the electricity water bill, get time to read and write. Now his son has given him this time for some time.

Bhupesh Baghel says that he has full respect for his father, but if any of his statements have hurt any society and it is against the law, then action will be taken.

The question is, what message does Congress want to convey with the arrest of Nand Kumar Baghel?

Will this move bring Brahmins from UP or Uttarakhand with him?

Can Bhupesh Baghel be the star campaigner of Congress’s election campaign in UP?

Should this move be considered a strategy to quell the opposition of a few Brahmin organisations?

Is Congress still waiting for an alliance with Samajwadi Party?

At present, all eyes are on UP. Political mercury is in the sky.

Mayawati is holding a Brahmin convention, Akhilesh Yadav is also trying to woo Brahmins. BJP is trying to bring its angry Brahmin voters together in the name of Ram Mandir.

The Congress may seem to be lying on the margins, but from within, it has intensified its preparations.

In such a situation, any strategic mistake can prove to be very harmful to him.

There is definitely an attempt to send a message from the arrest of Nand Kumar Baghel, but how beneficial this step will be, will be a matter to be seen.

Falling population figures testifying to atrocities in Xinjiang, population decline by up to 48%

Package for the Economy: The need to announce Economic Stimulus by the Government

Package for the Economy: The need to announce Economic Stimulus by the Government The growth rate in the year of the pandemic can be positive ... Read More

India is going to make such a dose of biotech corona vaccine that the entire country's needs can be met India Biotech, the first corona ... Read More